The Average Daily Rate describes the average revenue per paid occupied room in a given period.

Explanation – How to calculate your ADR

With the ADR you can measure your performance, how your hotel has developed over a defined period of time. It also serves as a comparison with other hotels. However, you should be careful in a direct comparison with other hotels. The average daily rate does not take into account the hotel’s occupancy rate. For a competitive comparison, the RevPar or the TRevPar is better suited. If you want to make an economic comparison, you should look at the ARPAR.

An increasing rate indicates that a hotel is generating more revenue by renting out rooms. You can increase the rate for example by upselling or cross-selling promotions. Another problem is that no-show fees are included. Thus, a hotel can have higher sales on one day, but these are not included in the calculation.

By looking at the average daily rate, you can see the evolution of dynamic prices. In the past, there were often seasonal prices or annual prices. The Average Daily Rate hardly changed as a result and was constantly the same. However, as soon as a hotel works with dynamic pricing, conclusions about demand can be drawn from the high and low points of the ADR. A high ADR means that the market had high demand early on. You can adjust the price accordingly. A low ADR means that demand was weaker than expected and the price was lowered. Thus, the Average Daily Rate plays a big role in yield management and price optimisation. 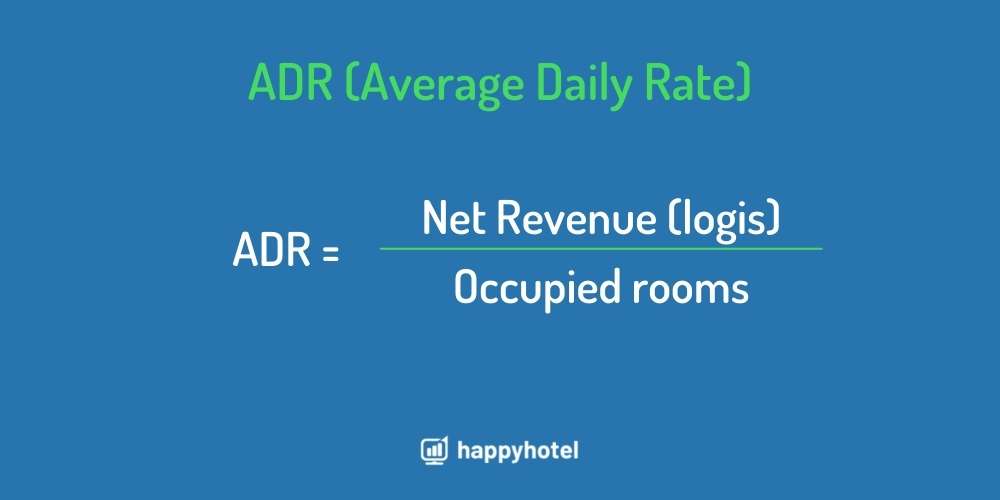 This value can be considered a good benchmark for the development of the average daily rate in the hotel for future rates. To make an economic forecast, the ARPA should be preferred. The ARPA considers additional sales and revenues from F&B, spa treatments, banquet and other sales. Furthermore, variable costs are deducted so that a comparison can be made from a business perspective. With all KPIs, however, it should be noted that advertising costs or commission payments are often not considered. Commission payments to booking.com, hrs, expedia etc. reduce the turnover of the bookings.

The index compares the own ADR with that of the competitor.

The own hotel has an Average Daily Rate of 100 €, the average rate of the competitors is 90 €.

This means that the hotel has a higher ADR than the competitors.