It makes sense to always state the revenue in net figures so that the comparative value is not distorted. If the hotel has an increase in room revenue, this has a positive effect on the turnover. Since either the average room rate or the occupancy rate increases. Through the analysis you can understand how to maximise the turnover in the hotel.

What exactly is the RevPar?

In the field of revenue management, the RevPar is one of the most important business figures. Alongside occupancy, average daily rate and turnover. These parameters give conclusions about the past and future developments of the hotel. It is important to note that you can calculate these from different time periods. You can calculate the value for a day, a month, a quarter or a year. If you do not yet use the turnover in your hotel for the performance analysis, you should definitely do so! Because it is also relevant for investors or for financing with banks. Depending on the market, target group and season, it can have strong upward or downward fluctuations. Therefore, it should always be used with other key metrics in the hotel as a basis for analysis. Since the hotel market can be influenced by various influences such as holiday periods, trade fairs or congresses, it is important to have its key performance indicators under control to ensure economic success.

There are two different ways to calculate the revenue from accommodation:

In the following example, our hotel has 100 rooms, 50 of which are occupied, at a daily rate of 70 €. This results in a turnover of € 3,500 at an occupancy rate of 50%. The rate of revenue per available room is calculated as follows: 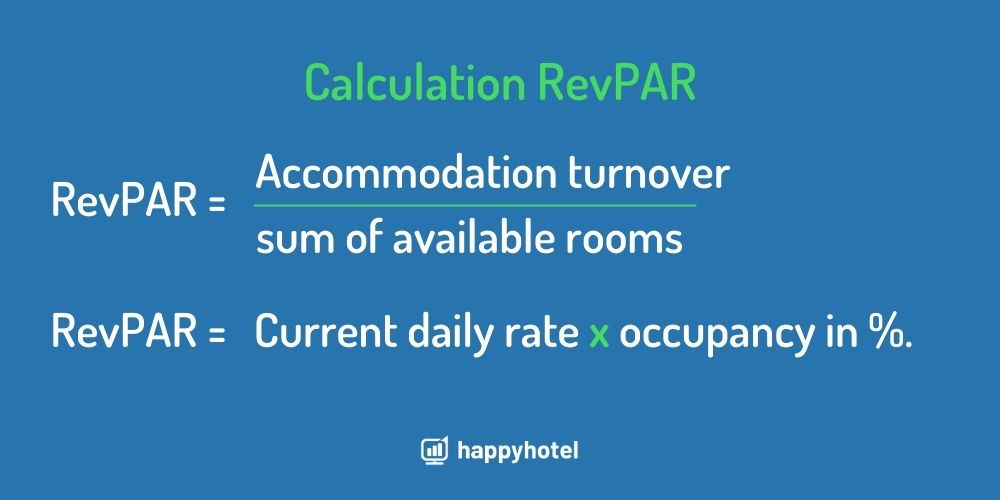 To compare prices, revenues and sales, the rate for revenue per available room serves as one of the most suitable ratios. However, it has a teacher – the economic profit.

An example will better illustrate this:

Hotel A and Hotel B both have 100 rooms. Both hotels always rent out their rooms on the same day:

Hotel A rents out 100 rooms for 50 €
Hotel B rents out 50 rooms for 100 €.
Thus, both hotels achieve a turnover of 5,000 € with a RevPar of 50 €. Thus, both hotels have the same value in comparison. However, the gross profit is completely different. Since Hotel A rents out 100 rooms and thus 50 rooms more than Hotel B, this results in more variable costs. As already mentioned, the cost factor is one of the weak points of the RevPar analysis as well as the neglect of additional turnover.

In contrast to the RevPar, the TRevPar (Total revenue per available room) includes all revenues that are made up of accommodation, catering and additional sales. As already mentioned, the RevPar is used much more often in the hotel industry than the TRevPar. The advantage, however, is that it does not only focus on accommodation but also includes other revenues. The TRevPAR thus provides a better overall view, since gastronomy, wellness, conference and banquet revenues as well as application revenues are also considered. Thus, additional consumption revenues such as the bar are totally neglected in the RevPar. However, especially in the case of full-service hotels and holiday hotels, these are turnovers that are closely related to hotel occupancy.

The TRevPar is calculated as follows:

TRevPar = total turnover / sum of available rooms.
In the following example, our hotel has 100 rooms, 50 of which are occupied, at a daily rate of 70 €. On average, there is an additional turnover of 10 € per room due to F&B and wellness area. This means a total turnover of 4000 €. The TRevPar is calculated as follows: 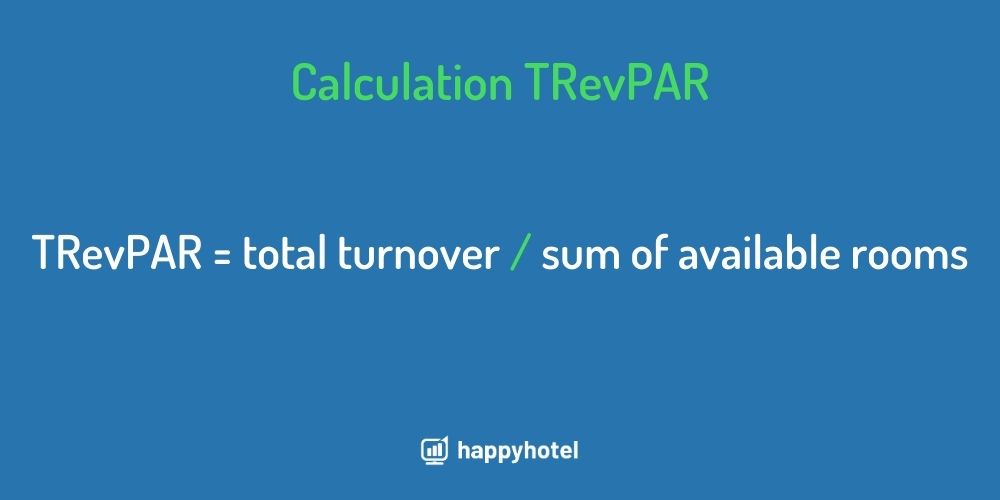 RevPar and TRevPar are good indicators for comparability with other hotels, but they say nothing about profitability. Costs incurred are neglected in both cases. ARPAR (Adjusted revenue per available room) is a very good indicator for this. In order to assess the efficiency of the hotel operation, the ARPAR also includes the variable costs per room occupancy. This consideration makes a lot of sense because it disproves the assumption that “occupancy is the main thing”.

The ARPAR is calculated as follows: 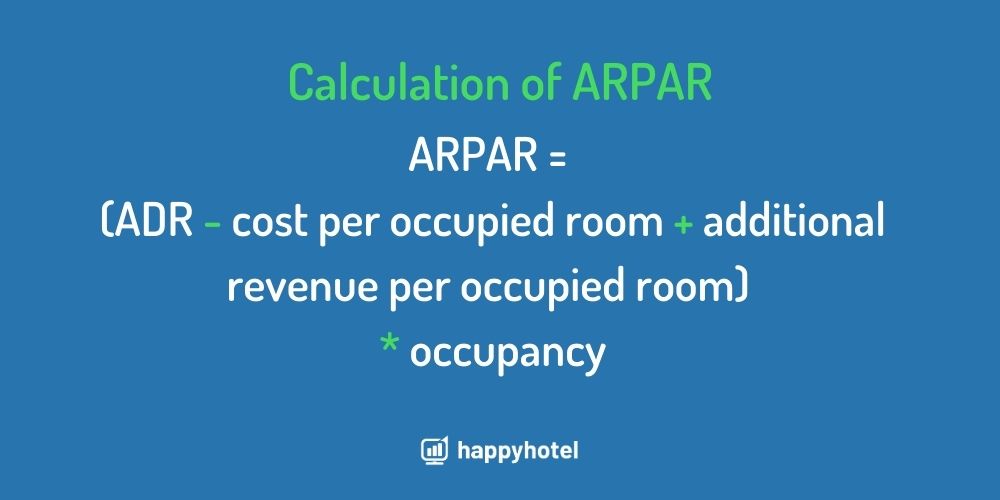 Room prices as well as rates and occupancy influence each other. The RevPar can be used to determine which ratio of price to occupancy makes the most sense. This makes it probably the most important key figure in the area of revenue management within the hotel industry and serves as a recognised benchmark and price optimisation.

The value is therefore more suitable as a comparative value among hotels than the pure average daily rate. The RevPar offers a great added value in that one can compare hotels with high occupancy and low rates as well as hotels with low occupancy and high rates. The extension would be the TRevPar (Total Revenue par available Room), in which not only the hotel revenues but also additional sales, application revenues and F&B revenues are included in the calculation. Every hotel should budget its KPIs such as RevPar, TRevPar and ARPAR so that they are permanently subject to performance control. By mastering the key figures in revenue management, one can counteract the increasing complexity in the competition for the best room rate.